Joined 3 mo ago
·
180 Posts
Since the KTM ones for the 890 require that ugly little box on the bars, I would just go straight for Oxfords which also have a box on the bars, but way cheaper and much more effective.

Blwnbyu said:
And lastly, here is a comparison of the two tail Tidy's. The NRC and MNNTHBX. The MNNTHBX is drastically brighter, looks better, and is a much higher quality part.

That height difference is apparent. I wonder how much of that alone is from the Michelin tires, as they are nearly always so much more, 'triangulated'. Love those tires.
B

1mfwic said:
That height difference is apparent. I wonder how much of that alone is from the Michelin tires, as they are nearly always so much more, 'triangulated'. Love those tires.
Click to expand...

That's a good question. Even with the bikes side by side, I still cannot see where all the extra height comes from.

michaelnel said:
I suspect it comes from a longer shock.
Click to expand...

Both bikes have the same amount of suspension travel.
B

Joined 7 mo ago
·
155 Posts
I did load all my KTM's up for a roadtrip last weekend. I SHOULD have had some amazing gopro footage chasing a GSXR1000 through one of the oldest canyons on earth, but I took a rock to the screen before we even entered the canyon. I will still throw some of the video together just for shits and giggles. I was BLOWN away by how well the 890R could hang with him, and expectedly, eat him up in the tighter sections. But even on the straights, I had no issue keeping up, and he's a very experienced street rider.

Joined 7 mo ago
·
155 Posts
Last night I added the Vanasche Motorsports case saver, for bling, and so I can see that countershaft sprocket seal that everyone seems to think leaks.. I also finally got my plate. I took the MNNTHBX plate bracket and flattened it out, flipped it upside down and mounted the plate for a full tuck. Everything is solid, although I may have the plate bracket revised and cut on a cnc plasma table so it sits completely over the plastic block on the tail tidy instead of down below. All in all, much cleaner, and most importantly, harder to read lol.

Blwnbyu said:
Both bikes have the same amount of suspension travel.
Click to expand...

Suspension travel is not related to ride height. If you have two shocks that both have 5" of travel and one is 1/2" longer eye to eye, that one will have higher ride height.

Joined 4 mo ago
·
74 Posts
Thanks for showing the Vanasche Motorsports case saver. I just ordered one!

Blwnbyu said:
Spent the day riding my new 890R. Picked it up this morning and transfered the exhaust, mirrors and tail tidy off of my 790.. I have to say, the difference between the two bikes is NIGHT AND DAY. Unfortunately, KTM seems to be having an issue and pulled the tech pack from being available for download, so I don't have the quickshifter or other goodies yet. On a plus note, I did find the Akro EVO map in the options on my dealers tablet, so that is available for cat deletes. The biggest difference between the two bikes comes from the tires IMO.. The turn in on the 890 is incredible. It WANTS to corner. It lays down so easily it's insane. Also, there is a BIG torque difference from Idle to redline. Peak horsepower on the top end isn't that noticeable, which is fine, but you feel the the torque through the whole rev range. The suspension is more controlled and firm, and the brakes are outstanding. I was head over heals in love with this bike until it overheated. I had to pull over and let it cool down on a 45 mph road at around 55* F. I don't know if the cooling system was not burped properly or what. This happened at around 100 miles on the ODO after a morning of faster riding. I checked and noticed the fan wasn't coming on, so I checked all the fuses, which were ok, and wiggled the relays. Wiggling the relays seemed to do the job. But, the 890 still heats up idling, even with the fan on, while my 790 can Idle all day long and never get above 4 bars.. I don't know what the issue is here yet, but I have an incredible dealer and we will get it figured out..

*Update Today.
Since I have both bikes, I can do some testing. It's currently only about 35 degrees out, so I fired both bikes up in the driveway and let them idle. The 890R got to 4 bars in half the time that the 790 did. I video'd the whole warmup process. Both fans turned on at the top of 4 bars but the 890R kept climbing in termperature, eventually hitting 7 bars while the 790 was still at 4. I ended up shutting the 890 Down at 7 bars and let the 790 run for another few minutes, FINALLY hitting 5 bars with the fan running constantly. I will be taking the 890 back to the dealer on Monday. It has 130 miles on it, and the 790 is at 740. I've never seen the 790 above 5 bars.


Noticeable Differences between 790 and 890R
Mirrors.. The 890 factory mirrors look alot better.
Front Turn Signals are slightly revised.
TFT display is slightly different with different menus and displays. Size is still the same.
Black Tank
Tires. If you put these tires on the 790 It will turn it into a different kind of monster
Handle Bars on the 890 have alot less rise. I can post pictures of the two if you guys wish.
The daytime running light uses a different part of the LED headlight.
The 890 is SLIGHTLY louder with my SC exhaust than the 790 was.
890 owners packet is now a cheap chinese zipper bag instead of the traditional KTM hard zippered pouch. 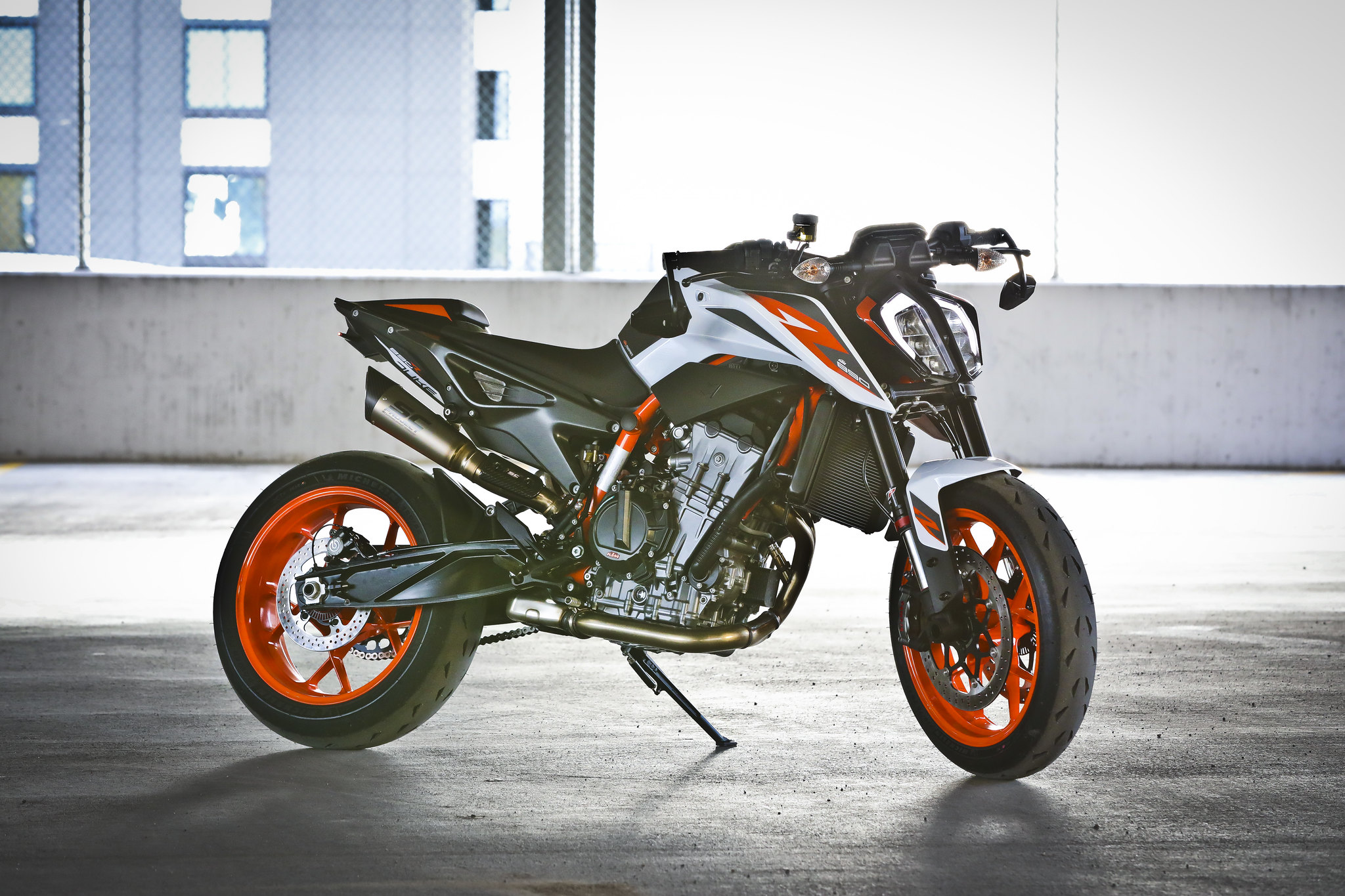 Just want to point out it's likely that the books for the KTM 890 Duke R will still come with the nice zippered folder, your dealer has just run out. I'm the business manager at a Honda/Yamaha/BMW dealer, and our BMW customers are always upset when we give them the spare keys and books in the crappy plastic pouch. When we run out and order more they come from Germany and take FOREVER for the orders to be fulfilled.

doubleXblack said:
Just want to point out
Click to expand...

doubleXblack said:
Just want to point out it's likely that the books for the KTM 890 Duke R will still come with the nice zippered folder, your dealer has just run out. I'm the business manager at a Honda/Yamaha/BMW dealer, and our BMW customers are always upset when we give them the spare keys and books in the crappy plastic pouch. When we run out and order more they come from Germany and take FOREVER for the orders to be fulfilled.
Click to expand...

Each bike comes with it's own manual pouch. It's not like the dealer orders them in bulk and gives them out randomly. I am willing to bet you are wrong on that one.

Joined 3 mo ago
·
180 Posts
The difference for me on the 890 is that all the other KTMs I have owned came with a binder. The 890 comes with something that appears to be a neoprene pouch.
B

michaelnel said:
The difference for me on the 890 is that all the other KTMs I have owned came with a binder. The 890 comes with something that appears to be a neoprene pouch.
Click to expand...

Correct. I'll be selling my 790 with that "pouch" lol. Pretty soon they'll stop including the $13k Pens too

Post back in a week with how blown away you are

Joined Dec 16, 2018
·
76 Posts
Picking up my 890 R tomorrow. Already have the Wings slip-on and hi-flow airbox lid ordered and on its way. Decided to try the Booster Plug fuel modulator instead of the Coober ECU this time as the 890 has better fuel management sensing than the 790 already, and the Booster Plug is much less expensive and I've had good luck with it on 2 previous bikes. I'm getting the Quickshifter + and the Track Tech package as well. Should be a hoot...